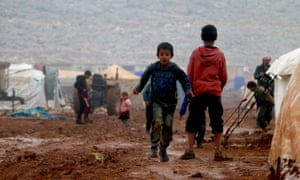 Children at a refugee camp in Idlib, Syria. Traumatised children would be more likely to heal with parents and siblings by their side, the report said. Photograph: Anadolu Agency via Getty ImagesThe UK government is “deliberately and destructively” preventing child refugees from being with their families, instead leaving them in the care of local authorities, according to a report. The UK has the third highest number of unaccompanied child asylum seekers in Europe, with 3,060 claiming asylum here in 2018. That year, 1,072 were recognised as refugees with a further 73 granted humanitarian protection. While adults who are granted refugee status in the UK have the right to bring their children here, it does not work the other way round – child refugees are not allowed to bring parents or siblings to the UK after the government has given them refugee status. The UK is the only EU country not to permit this form of family reunion. 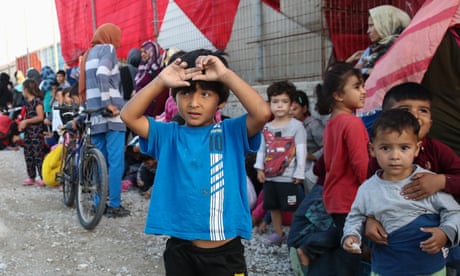 MPs vote to drop child refugee protections from Brexit bill Read moreThe Home Office said it has no plans to change the rules and that allowing child refugees to bring close family members to the UK would create “perverse incentives” encouraging children to embark on dangerous journeys. But the Without My Family report from Amnesty International UK, the Refugee Council and Save the Children found that children are unaware of family reunion policies in different European countries and flee their countries simply because they are seeking safety. This group of traumatised children would be more likely to heal if they had the stability of parents and siblings by their side instead of being placed in the care system, where some are vulnerable to exploitation, it said Quick guideHow children fleeing conflict arrive in the UK Show AdvertisementThe authors interviewed 12 children and young people granted refugee status from conflict zones including Syria, Sudan and Eritrea as well as speaking to lawyers, social workers and other professionals and analysing court judgments and legislation. The report accuses the government of a flagrant breach of international law and of causing irreversible harm to children. It calls for urgent action to allow children to reunite with their parents and siblings. Family separation is having devastating effects on this group of children and young people including constant anxiety, fear for their families’ safety, and in some cases serious mental health consequences, the report said.

Guardian Today: the headlines, the analysis, the debate - sent direct to you Read moreAn inquest last year heard that a 19-year-old Eritrean refugee, Osman Ahmed Nur, was worrying about the welfare of his family he was separated from at the time of his death, particularly his younger brother who was in prison in Egypt and his older brother who was in Sudan. He felt he should have been supporting both of them but under the UK’s immigration rules reuniting with close family members was not an option. One 17-year-old Sudanese refugee featured in the report fled his country after being tortured and imprisoned at just 15 years old. He had not seen his family for three years. “Being without your family, it is like you have a body without a soul,” he said. The report highlights the consistent criticism the government’s policy has been subject to, from senior judges to specialist committees of parliamentarians and the Committee on the Rights of the Child. In 2018, MPs from across the political spectrum voted with an overwhelming majority to change these rules but they remain in place. Kate Allen, the director of Amnesty International UK, said: “The UK government is deliberately and destructively preventing child refugees from being reunited with their families. A simple policy change would transform the lives of these children and help ensure they grow up safe and secure with the people they most need and love.” Daniela Reale of Save the Children UK said: “There is clear evidence that keeping children separated from their families causes long-lasting psychological, health, social and developmental damage for children of any age.” Maurice Wren, the chief executive of the Refugee Council, said: “The UK’s rules on refugee family reunion are a flagrant breach of the government’s legal obligations to act at all times in the best interests of the child. For many separated children, being reunited with family members is indisputably in their best interests, yet in the UK we choose to keep them apart for the inhumane reason that this might deter others from seeking safety and protection.” A Home Office spokesperson said: “We support the principle of family unity and have reunited over 27,000 family members in the last five years. However, we also believe that we must not create perverse incentives for people, particularly children, to be encouraged – or even forced – to leave their families and risk dangerous journeys hoping relatives can join them later. This plays into the hands of criminal gangs who exploit vulnerable people and goes against our safeguarding responsibilities.”
2 views0 comments